A 760-year-old sword belonging to a knight from the Crusades has been found by a fisherman in Spain’s coastal town of Neix Cartan. The sword, called a cuneiform sword, was found partially encased in… 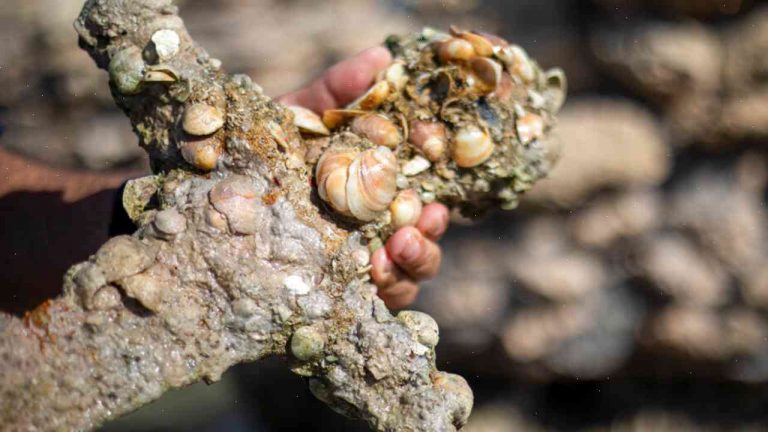 A 760-year-old sword belonging to a knight from the Crusades has been found by a fisherman in Spain’s coastal town of Neix Cartan.

The sword, called a cuneiform sword, was found partially encased in sand and mud by Jose Antonio Dávila while he was trying to net octopus near Neix Cartan, near the town of Cuenca.

Although he was trying to find the octopus, he said, he still felt slightly anxious. “I still had this feeling that I was the last man on earth,” he told the newspaper El País. But the octopus didn’t bite — and his life changed overnight.

“I had to dive, so I got into the water first,” he said. Then he returned to shore and told his family: “I found a sword.”

The sword was most likely owned by the knight, named Hieran Herr, who served with the 13th-century force known as the Knights Templar. He fought with Herr the Canterbury, a group dedicated to helping the region of the Holy Land.

The sword was “probably used by someone” as a fighting tool, especially since it had been used for centuries, said Bill Kellar, a curator at the Museum of History and Archaeology at the University of Oxford in England.

“Its most likely use would have been as a hand-to-hand combatant weapon in encounters with other knights,” Kellar said in an email to The Washington Post.

But the sword was only found in the small case in which it was contained, with no other evidence of any previous use found — suggesting that it may have been left there to collect sediment, said Daniel Bendorf, a professor of zoology at the University of Pennsylvania. This suggests that the sword may be similar to swords seen in other archaeological sites, Bendorf said.

Typically cuneiform swords were made of thin strips of wood, he said. But the ones discovered in this particular case are full of iron plates, some of which date from the third century. This would support the theory that the sword was abandoned “as part of a plot to hide its true identity, as part of a sectarian, racial attack, or in order to attack by remote control another group of people, or to attack because of one’s beliefs,” he said.

While the sword would help contribute to knowledge of different Medieval weapons, Kellar cautioned that there are a lot of unknowns.

There have been conflicting theories about the role of cuneiform swords, Bendorf said, but most experts agree that the swords were popular among soldiers during the Crusades, a period in which the crusading armies were fighting in parts of the Islamic world.

“It is quite possible that the Knights Templar would have fought with the swords, probably in combination with other medieval equipment,” he said. “The sword was probably a defensive weapon as much as it was a combat weapon — specifically that being used as a kind of club, or, worse, a club being used as a club.”

While most of the swords are simply one big sheet of iron, the Scylla knife, made of hammered copper, is “certainly among the most hand-weighted weapons ever made,” he said.

Kellar, who is also the lead curator of the British Museum’s collections, said archaeologists still believe that such swords were distributed to the various missions.

“There may have been secret broods in British and French establishments throughout Europe, for example, and so they got help from much of Europe, for purposes of military enhancement, at least in the Crusades,” he said.

There may also have been similar guilds in Israel, Egypt and Asia Minor, he said. “The thing about this weapon is that it belonged to a culture that’s over a thousand years old,” he said. “So it can only speak to a time, really, when the community would be talking to and about itself.”

It is unclear whether the knight or his sword ever made it back to England. The city of Cuenca is “not that close to Portsmouth,” Kellar said. “I guess he would have had to have died there to travel back.”