Asisat Oshoala: ‘My mother kept me at home so I could play football’

In Ghana the 19-year-old Asisat Oshoala is dubbed a “national treasure”. But in Lagos it’s not her success on the pitch that makes her special; it’s what one mother did not. Last year Nigeria’s… 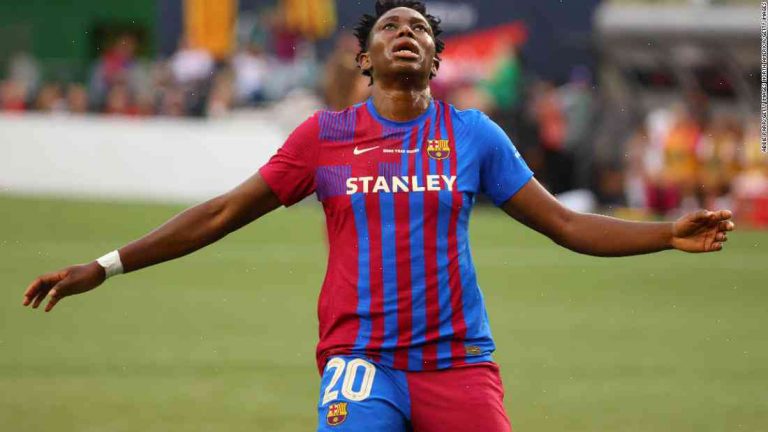 In Ghana the 19-year-old Asisat Oshoala is dubbed a “national treasure”. But in Lagos it’s not her success on the pitch that makes her special; it’s what one mother did not.

Last year Nigeria’s Asisat Oshoala had her face plastered all over billboards in Lagos when she won two major tournaments in three months. The striker scored 11 goals and helped the Super Falcons win the African Women’s Championship before being instrumental in the “Super Six”, which took all six African champions to play for a lucrative prize money. Oshoala beat off fierce competition to win the money and travel to Spain to play for Paris Saint-Germain. Since then she has scored 10 goals in 19 games and has helped her nation qualify for the Fifa World Cup finals for the first time since 1999.

But now, for Oshoala the triumph of pride over fame, and loving family over chance encounters with fame are much more important.

When Oshoala was a kid, she had a handicap; she needed help to even play sport.

“When I was young my mum was my coach. I always used to call my mum and tell her to take me to basketball or tennis. It was too much pressure for her. So she always let me stay at home and play football,” Oshoala said.

You never know what happens. We didn’t get searched at the airport but can they tell me something that you don’t know about football? Asisat Oshoala

Her mother was reluctant to let her go for long periods at the time because she had other children, but Oshoala loved sports so much that she would beat them, then beg for an hour on the table. “I have always remembered those days. I just wanted something to do that I didn’t have time for at home,” she said.

Now, Oshoala says she follows her mother’s example. She’s not worried about being spotted by officials at Lagos airport, or her match kicks off at quarter past 12 at night, because her mother would be there to greet her with a smile on her face.

“You never know what happens. We didn’t get searched at the airport but can they tell me something that you don’t know about football?” said Oshoala.

“Sometimes it’s a blur, because I was happy for those moments and I loved doing it and even when I leave the training ground I go out with the good memories,” she added.

Now, she just wants to finish the job at the World Cup with the Super Falcons and go on with life. “My life is now all about these two goals: the World Cup and the CAF Champions League. But if I got used to winning, I wouldn’t know when to rest,” she said.

Tears rolled down her cheeks when she saw a picture of herself and her mother dancing at the end of her European tour in Barcelona. “As time goes by, I want to say thank you to her because she just didn’t want to leave me alone. I just remember her and that’s just my mum,” she said.