By Charlie Kelso Tall weeds and herbs growing on the Bayview trail are a real hazard to cyclists in one area of Glasgow A sensitive and divisive issue for Scotland’s cyclists, with East Dunbartonshire… 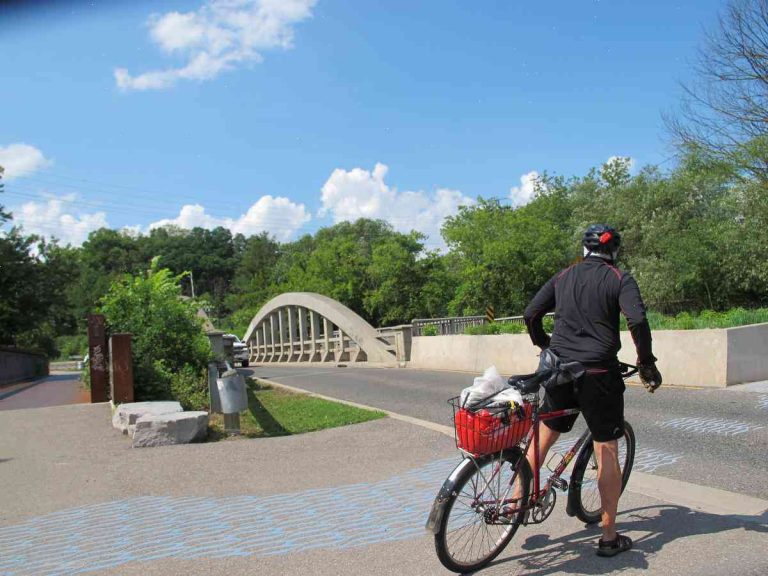 A sensitive and divisive issue for Scotland’s cyclists, with East Dunbartonshire being our second most used route, after the Glasgow Green, the Bayview trail has proven particularly controversial.

One part of the trail can now be accessed by bicycle, with the development of a segregated cycle network and the extension of the Glasgow Green crossing.

However, it is also a stark reality that it is difficult for all cyclists not to fall foul of the thick and beautiful native plants and native wildflowers which grow on the trail in some places.

A protected cycle track has now been constructed in one area of the trail and safety barriers can be seen being erected on the other.

Faced with the prospect of a single road on either side of the path, motorists understandably question what benefit there is in erecting barriers to protect cyclists.

However, when we consider that it has taken decades to erect the stone walkway which attracts thousands of sightseers annually, installing safety barriers on the trail seems the obvious option.

Despite the readily apparent danger posed by trees, known local weeds such as almond, red olive, spruce and burnian look like they can only provide shade to motorists.

People are already using the trail safely and bikes are already permitted to be ridden on the pathway, sometimes people come even sooner.

So why is it that the City of Glasgow Council has only completed half of its plan to remove the dangerous vegetation?

Why is this trail of many benefits failing to deliver for its most important users?

Cyclists and all users of the trail should be proud of this bikeway and its successes. However, it appears that even these successes are being overlooked for members of the public.

It is fair to expect the authorities to be commended for such ambitions and for achieving these objectives. Yet, what is lacking is the boldness and determination that the problem posed by some varieties of natural vegetation is quite simply too great to be regarded as minor or slightly inconvenient.

I hear what you may say – I’ve seen cyclists side-swipe these poor plants, wiping out their leaves in the process. Yet the case of these tall weeds can prove quite dangerous for cyclists, in a field or on the pathway.

Certainly, the text, fence, posts and barriers are all protected from accidental injury, yet, I am aware of at least one incident this year where the vegetation had already begun to grow back into the path after the barrier was installed. I heard the cyclist screaming to his friend ‘don’t touch the barriers’ as he applied a fresh layer of grit after becoming partially hidden by the vegetation.

It is likely that the two sides of the trail which form the opposite sides of the river Clyde were always intended to be ruts into which nature can spread. It would have been of interest to note the wide open cut through which, ever since the river was restored, the plants have continued to grow in the vicinity of the footpath.

Perhaps there is a competitive aspect at play here, with nature’s growing season resuming prior to our cyclists arriving at each junction.

After all, perhaps the aim is to plant the best living, foraging wildlife for other agricultural uses after fallow periods. Is it possible that a seed or an herb seedlings can be successfully planted at the foot of the barriers – I have not ruled this possibility out.

What is a forgivable reaction from a plant life, deployed in the long term interests of cyclists in a shared and inclusive space?

The Bayview trail has been described as ‘the proverbial cherry on the cake’, and so proud of the magnificent cycle route that it has become. I don’t mean to put a dampener on the constructive aspects, but when driving on the path this summer, there does still seem to be an element of the ice cream to the cherry.

Charlie Kelso is a documentary maker who has filmed some of the most memorable and memorable moments in Scottish cycling history. You can view his documentaries at www.charliekelso.com.