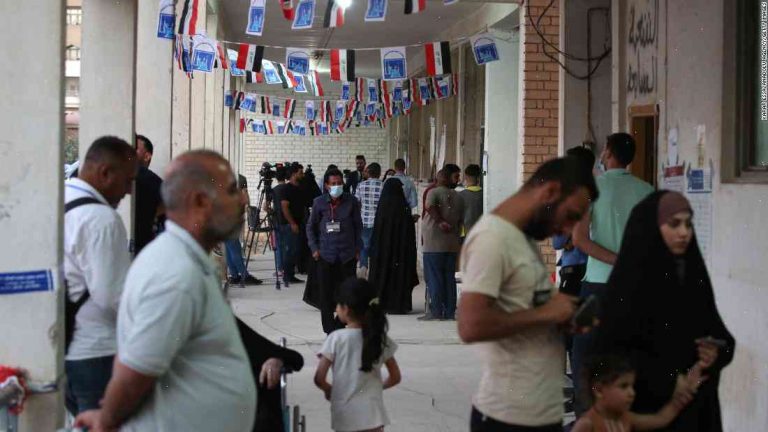 Iraq officially opened its parliamentary polls two hours late Monday after hundreds of polling stations across the country were reportedly closed with hundreds of thousands of people unable to vote.

The voting turnout was the lowest in Iraqi history at 43 percent.

The Iraqi State News Agency claimed “dissatisfied voters in several areas in the north and in south” said they were unable to vote. The report did not cite a source and a State News official could not be reached for comment.

Around 76,000 locations had planned to open, but nearly 21,000 were inaccessible due to damage from past conflicts or to the rise of Islamic State (ISIS) extremists, the Associated Press reported.

According to Iraqi state television, international observers flew into Baghdad on a U.S. military-chartered plane, and hundreds of foreign observers were posted to polling centers across the country.

Among the foreign observers is an American who has served as a judge in Afghanistan and Iraq and as a legal adviser to the U.S. Embassy in Iraq, according to Foreign Policy.

Many did not see their vote count because they could not get to the polls on the opening day, FAS reported.

Overnight, three bombings in southern Baghdad killed 26 people, and a string of attacks and car bombings killed another 44.

A broad Sunni, Shiite, Kurdish and Arab alliance has formed the largest blocs in parliament, hoping to unseat Prime Minister Haider al-Abadi, who was elected in 2014 with a coalition government.

Al-Abadi had said he planned to step down after the election.

Also on Tuesday, the United Nations and other international organizations observed voting in more than 4,500 polling stations throughout Iraq.

More than 7.7 million Iraqis had registered to vote.

About 6.2 million of them were registered to vote in Baghdad, Iraq’s second-largest city.

Opposition politicians had called for a boycott, claiming that authorities had not delivered ballot papers to thousands of people in areas impacted by the violence, and that lawmakers had made election laws subject to amending in order to benefit candidates affiliated with the Shiite religious establishment.

At least 107 people were killed on the first day of voting, including 64 members of the Iraqi security forces, and nearly 400 were wounded, according to AP.

At least 16 voters in Diyala province near Baghdad were killed when a suicide bomber opened fire on a Baghdad polling station, officials and health officials said.

The electoral commission urged voters to cast their ballots in an apparent effort to curb any further damage to the polls from attacks.

There was no immediate claim of responsibility for the blasts, which hit along the capital’s northern and eastern outskirts.

Many Iraqis have grown impatient with al-Abadi and have been calling for his ouster, citing a spate of deadly security incidents this year.

Seven Iraqis were killed when a suicide bomber detonated a car bomb outside a polling station in the town of Imam Wais in the northern province of Salahuddin on Sunday, state television reported.

So far, no insurgents have taken responsibility for any of the attacks during the balloting.

Also, protesters from the Ahrar party — one of Iraq’s most prominent Shiite Islamist political groups — gathered at the al-Amil road in central Baghdad, a regularly used access route to vote, on Monday to protest alleged delays in the electoral process, a security official said.

A tense standoff played out between Ahrar members and police as they demanded reopening the road after it was blocked for nearly a week, which the officials declined.

Thousands of Shiite protesters had entered al-Amil Road — the main artery into the southern suburbs of Baghdad that leads to the highly contested neighborhood of Karrada — last week, demanding that their voices be heard in the conduct of national elections.

On Friday, security forces attacked the protesters, accusing the Ahrar party of stoking violence, an accusation that the party has denied.

Al-Abadi earlier this year angered members of the country’s Kurdish minority by calling for Baghdad to prepare to hand over disputed territories to Kurdish authorities at a time when the Kurds were preparing for a referendum on independence.

Kurdish officials agreed to postpone the vote as a result, but the vote still went ahead on Sept. 25.

Kurdish officials are hopeful they will win a majority of seats in the new parliament.