Abdulaziz Moumas, chief deputy prosecutor in Mannheim, showed photos of 14-year-old Suma Ali, who was kidnapped and tortured during the war in Iraq before she was married to a militant who then left her… 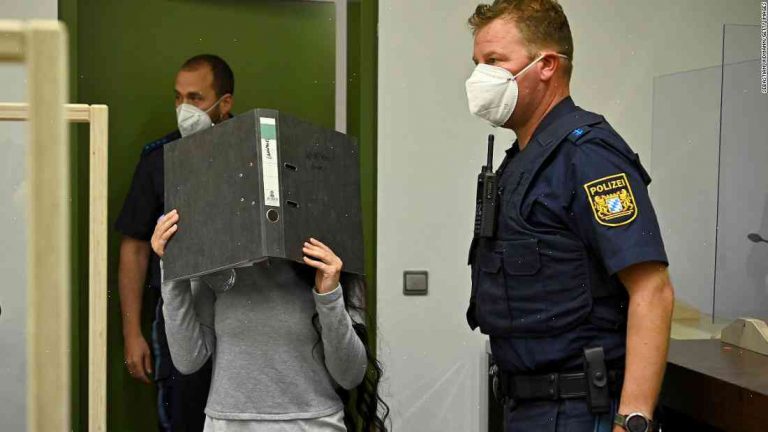 Abdulaziz Moumas, chief deputy prosecutor in Mannheim, showed photos of 14-year-old Suma Ali, who was kidnapped and tortured during the war in Iraq before she was married to a militant who then left her to die in the hot sun, according to the Frankfurter Allgemeine Zeitung.

Moumas said the images depicted a naked girl taken in captivity who was ‘severely tortured’.

She added: ‘He finally left her there in the hot sun, and without water. At one point, he even forced her to pee on herself. There was a cup of water sitting close by.’

He said the crime was one of the most brutal in the history of terrorism, the Frankfurter Allgemeine Zeitung reported.

Suma Ali, 14, survived after being kidnapped and tortured by ISIS militants in Iraq, then married to their chief torturer

A prosecution statement said Ali ‘was subjected to torture and maltreatment with an iron rod in the warren of houses in Tikrit’ where she was held captive for 18 months before she was rescued by coalition forces.

U.S. F-16 jets had carried out air strikes on the ISIS camp that was holding her and that ‘left her unrecognizable’, the statement said.

‘She was badly beaten,’ it added.

‘The time she had to spend without water is still a horrifying experience.’

Ali was also raped repeatedly in captivity, but managed to escape on her own after being sold 10 times to different Islamic State fighters, according to the statement.

She was sent to Erbil in Kurdistan and underwent a ten-month torture and rape ordeal which left her with injuries that still scarred her.

Suma Ali’s tale is the latest in a string of gruesome accounts of the brutal tactics used by ISIS, which has been wreaking havoc across Iraq and Syria since 2014.

A spokesman for the Iraqi Joint Military Command said on Tuesday that a massive manhunt was underway for nine people suspected of beheading 38 Syrian soldiers in the village of Khirbet Ghazaleh in northern Iraq on Saturday.

Brigadier General Yahya Rasool, spokesman for the Iraqi military, told state TV that the four militants, including four Arabs and three Turks, were believed to have taken part in the gruesome crime.

They reportedly gathered up the captives and beheaded them in the garage of a farm in the village.

He also said the army had made several separate arrests for crimes committed in the area.