Written by Staff Writer Police fired tear gas and used rubber bullets on Friday to disperse protesting at least 250 members of a social media movement against what they see as unjustified police killings…. 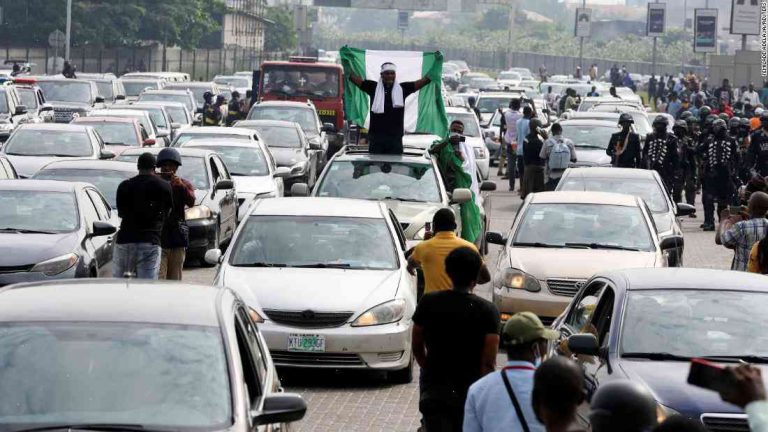 Police fired tear gas and used rubber bullets on Friday to disperse protesting at least 250 members of a social media movement against what they see as unjustified police killings.

Activists affiliated with the #TheMeToo social media campaign, a loose coalition of women, men and youth trying to improve public perceptions of police, had planned to hold a rally in Lagos, Nigeria’s most populous city, where they were scheduled to hold an Iftar (breaking of the dawn) meal to mark the end of the Muslim holy month of Ramadan.

The protest called “The Movement For Justice And Police Accountability” was initially scheduled to take place near police headquarters in the Lagos suburb of Epe before organizers moved the march to the residential neighborhood of Lekki, where police allegedly shot dead one man and wounded three others last month.

“Activists who took part in yesterday’s protest were fired on with tear gas guns as they attempted to take to the streets of Lekki,” Femi Adesina, a spokesman for President Muhammadu Buhari, said in a statement on Friday.

“There is absolutely no justification for police to use police guns to hit protesters with rubber bullets,” said Ibrahim Zuru, a journalist with the National Association of Newspaper Editors (NANO), a local news media group based in Lagos.

The protesters were angered by the violent crackdown on protests in August 2018 when security forces clashed with some 50,000 protesters calling for the resignation of Lagos state governor Akinwunmi Ambode.

The police were called in after stone-throwing protesters blocked the Lekki-Epe expressway, the main link between Lagos and the southern tip of the mainland, when Ambode was heading home.

The police closed the road using fired upon protestors, killing one and wounding 12. Human rights activists say the police used excessive force in dispersing the protesters.

Gustavo Kanza, who was one of the three people hospitalized last month in the latest protest, said he and the other victims were recovering after undergoing operations. Kanza, 30, said he had a bullet lodged in his back as a result of the police shooting.

“The police told the people that when they protest they have to disperse. Well, we didn’t disperse,” Kanza said. “We were peaceful. In Lagos state, we are not living a peaceful life, people are not happy. The (Kaduna) government should tackle it, where are the police coming from?”

The incident occurred in a village in Epe, not far from the notorious Lekki toll road where protesters demanding better services from the Lagos state government had gathered. The protesters accused state government officials of ignoring critical demands in the area, ranging from cleaner water and electricity supplies to emergency medical assistance for injured protestors.

“They are not satisfied with some of these demands, a restaurant for example, people are dying,” said Ayodele Ola, a member of the group. “Our people are dying, and they are sending police from there to shoot people.”

Ola said police brutality is common in Nigeria and blamed the government. “Now the government is trying to blame the police, when they are the ones that make the problem,” he said.