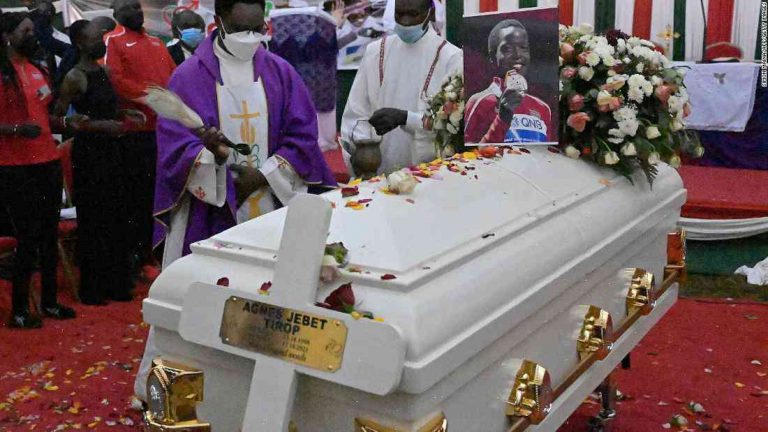 This article is over 3 months old

Kenyan athletics star Agnes Tirop has been buried in her home village after a ceremony at her final resting place.

She was fatally shot in a drive-by shooting in Nairobi on Friday.

Tirop was given a gun salute during the funeral service and her coffin was decorated with medals she won. A family friend read a testimony from Tirop’s mother.

She was one of Kenyans most promising track and field athletes before an early morning car accident in 2012 took away her left arm and left leg.

Tirop was identified as a suspect in a gun attack in July 2017, when gunmen opened fire on an advertising agency in Nairobi, killing two and wounding dozens. She was accused of being the main suspect in the attack but did not face any charges.

Tirop’s family has repeatedly protested against her death. Several motorcycle taxi drivers have turned their cars over to police in the hope that they will recover “the money they owe her”.

Kenya’s Deputy president, William Ruto, who led the funeral in a church service in the morning and then attended Tirop’s funeral, said the country was mourning a mother, a wife and a sister.

Tirop’s father, who was in Nairobi with her three-year-old daughter, said he would never forget his daughter’s smile, which he last saw in the morgue two days before she died.