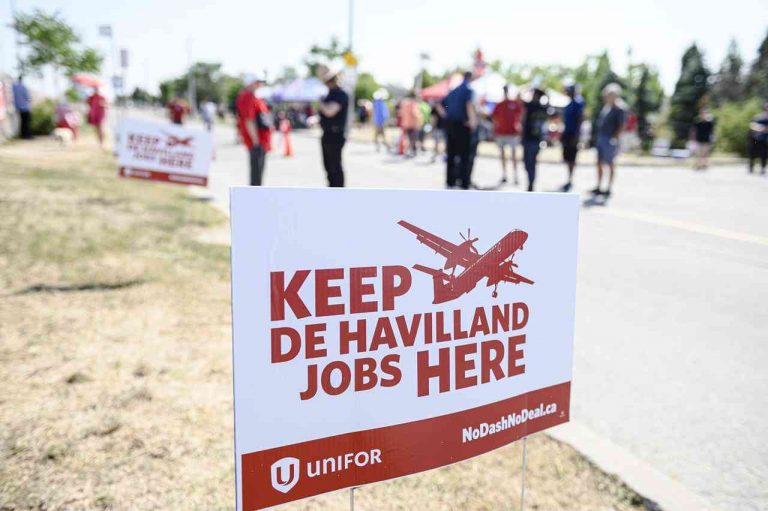 Members of the Unifor labour union at the Ford plant in Oakville, Ont., in western Canada, have ratified a new four-year contract between the union and the company, Unifor president Jerry Dias announced on Thursday.

After a three-month walkout and over a year of negotiations, the union said a new deal had been reached that “provides significant economic gains” and retained jobs in Oakville, at the world’s largest truck plant.

“The agreement offers our membership a better deal than Ford could have achieved in a lockout,” Dias said, as Ford workers ratify new agreements at Oakville assembly plant Read more

Financial terms and details on the deal were not released.

Dias said the union would take members “to the mat” to protect local communities and those left out of a long-term supply chain.

“We will end all speculation about all available jobs, with or without Unifor’s assistance. It’s that simple,” he said.

The Oakville plant, in Canada’s manufacturing heartland, was among four global facilities Ford closed to trim costs in 2016. The other plants in the United States, Turkey and Spain are still in production.

The Detroit Three’s production chains are tightly intertwined – linked by investment, suppliers and customers. A sudden interruption in a single factory can see supply chains or entire countries’ economies crash.

The US and Canadian governments have been engaging with Unifor to ensure the strike does not spread.

Though Unifor initially said it would support a Ford request to reduce certain company contributions to pensions, the workers’ last contract offered workers a $1,500 signing bonus.

Larry David developing Netflix series for his usual recipe: ‘Quiet, no one knows’