Wild victory over Canucks in Vancouver

Mike Neuvirth made 29 saves in his return to Vancouver as the Minnesota Wild earned a 2-1 win over the Canucks on Thursday night. Nino Niederreiter scored the game-winner with 1:53 remaining for the… 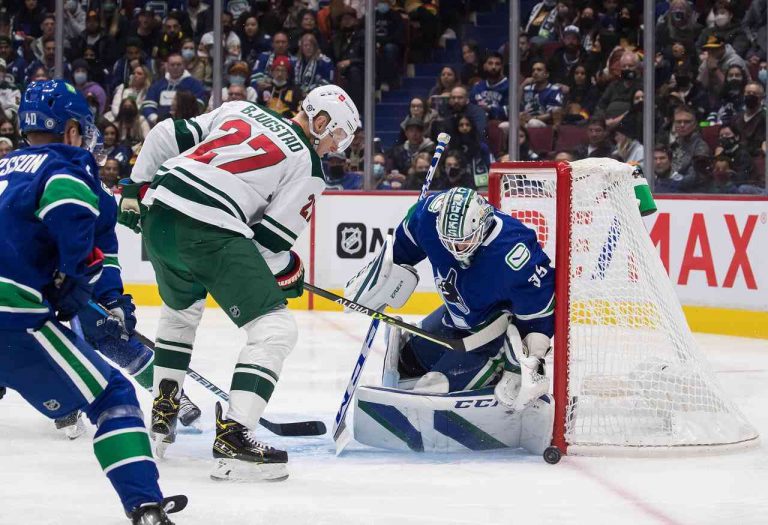 Mike Neuvirth made 29 saves in his return to Vancouver as the Minnesota Wild earned a 2-1 win over the Canucks on Thursday night.

Nino Niederreiter scored the game-winner with 1:53 remaining for the Wild, who won their third in a row. Related Articles Fox Sports North: Here’s what Minnesota teams should be watching for in 2019-20 season

Anthony Rouleau, Jordan Schmaltz both back with Wild after playing final season in minors

Bo Horvat scored the lone goal for the Canucks. Jacob Markstrom made 36 saves, but had little help in the final 40 minutes.

Both teams had early power plays.

The Canucks failed to convert on their first penalty. Minnesota didn’t get off a shot on the man advantage before the second power play was whistled for two minor penalties.

Minnesota killed off both penalties and avoided the embarrassment of having its penalty kill rate below 40 percent.

Spurgeon opened the scoring just 13 seconds into the period. He deflected Ryan Suter’s shot to beat Markstrom, putting Minnesota up 1-0.

Horvat tied it late in the period with his fifth goal of the season.

Despite Minnesota spending the better part of the period on the power play, the Canucks kept the puck out of their net. They were constantly shooting from the perimeter, drawing mocking cheers from the sellout crowd.

Minnesota had an excellent chance in the third when Mason Raymond was in on net, but Neuvirth made a terrific pad save to keep it 1-1.

The Wild got another power play late and got their second goal. Niederreiter scored his 10th of the season with 1:53 left, as he beat Markstrom to the far post.

US approves skin cancer drug made by Moderna