At least 6 killed in clashes between Shi’ite and Sunni tribesmen in heart of city, Beirut’s western Nejm district Beirut’s worst street violence in more than a decade has claimed at least six lives,… 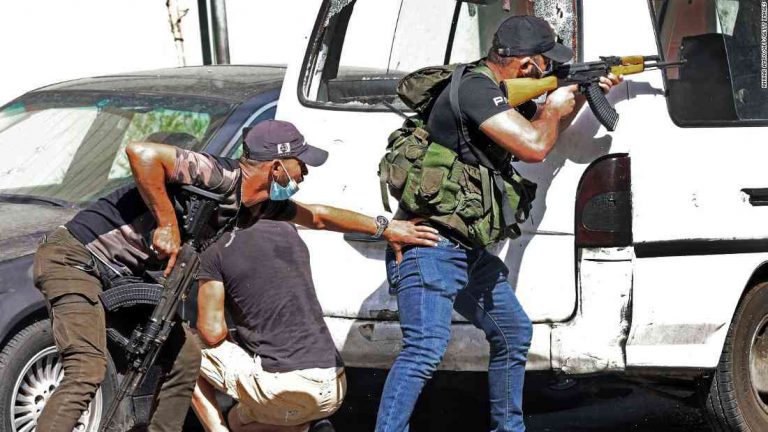 At least 6 killed in clashes between Shi’ite and Sunni tribesmen in heart of city, Beirut’s western Nejm district

Beirut’s worst street violence in more than a decade has claimed at least six lives, with an attack on a Hezbollah convoy leaving one dead and at least 10 injured on Saturday.

Live pictures broadcast on local television showed a chaotic scene as drivers abandoned their cars on the highway and fled at rush hour.

Shi’ite and Sunni tribesmen have engaged in violence on the outskirts of Beirut for the past few days, but clashes in the heart of the city were the worst to hit the capital since the fighting between different Christian sects after the assassination of Lebanon’s former prime minister Rafik Hariri in 2005.

Police have not yet confirmed the cause of the attack, which comes at a time of political turmoil in Lebanon and a bloody standoff in neighbouring Syria, where both sides are fighting for influence.

The clashes flared up on Friday night when, after overnight shelling, a convoy carrying the leader of the militant group Hezbollah, Sayyed Hassan Nasrallah, made a hurried exit from the city. The convoy was carrying ammunition and several dozen of Nasrallah’s bodyguards.

“We are under attack in Nejm … We believe the culprits are [to blame]”, Nasrallah said on Sunday, adding that authorities were still trying to identify those involved.

“There are a number of suicide attackers who were previously equipped and trained and this they carried out. Our guards fought them,” he said, adding that the “enemy” was definitely a sect or a militia.

Witnesses reported hearing exchanges of gunfire as well as explosions.

On Saturday morning, senior army officers met with members of rival groups and agreed to maintain a ceasefire in a bid to prevent the situation spiralling out of control.

About 500 police deployed on the streets, although they appeared unable to prevent casualties.